Returning is the motion of the Tao; going far is returning

The iteration between involution and evolution; between going away and coming back; and between death and resurrection myths of chthonian mysteries of all religions from India to Egypt are just three of the many patterns that embed life, process and evolution in the universe over time. The principle of sustainability as etymologically available from the word ‘Swastayan’ (rooted in Swasti) is the foundation of one icon that has embraced humanity from all angles of life, culture, science and religion. The movement of the quadrangular Swastika standing for the Vedic ChaturVedi on the one hand and the four pointed Carnot Cycle of thermodynamics on the other hand, is the sum of all Principles that govern the intent of the present website.

The etymology of the word Swastika is rooted in the fundamental Sanskrit word: Asti, which means an established configuration and a truthful valued existence. In the Indo-European tree, Asti is connected to the word 'esteem' (or a softer replacement of another closely related popular word namely self-esteem). Asti is quintessence of the valued self, which is tantamount to self-esteem.

In Old French, it is estime (noun), estimer (verb), and from Latin aestimare 'to estimate'. The essential meaning again is associated to set a high existential value which can be best estimated. It also means to regard a presence with respect or reverence, by virtue of the value of absolute existence and its positional existence, both. The key words here are acquired value and a degree of respect that is attached to that value. The two are inter-related and they represent the foundations of any sustained civil society. The ancient Aryan Society as preached by the Aryan Seers is precisely that.

The Sanskrit Etymon is from root As, leading to the word Asti meaning existential essence and consequent truthful foundation. The opposite is Nasti (which is Na Asti), meaning non-existence. Swasti is the benign (based on pre-fix Shu, which means good, significant and benign) forwarding of valued existence and the essential self-sustained truthfulness that is embedded within and gradually manifested without. Hence, Swastika is a DYNAMIC EQUILIBRIUM.

When Swasti is dynamic, procedural and validated over time, it is Swati + Ayan = Swastayan, leading to something that holds the key to sustainability as an evolutionary paradigm. In the present context, one may discover an Indo-European root / the etymon of the word 'Sustain' in a Sanskrit word Swastayan. Thus the two words peace (word is 'sanity') and sustainability may be taken as a binary one and the two are also somehow deeply rooted in the two corresponding words, Santi and Swastayan. As movement of Swastik is facilitated, it becomes a continuous, dynamic and value added evolution and progress of the human mind. It is just not a cyclic progress but also a movement and growth of the truthful existence which builds step by step, quadrant by quadrant, felly by felly and level by level (from the lower levels of truth to the levels which are higher and even higher). The movement is a pattern of the Swastika. A dynamic pattern of Swastik itself represents the solar world as envisioned by the Vedic seers. Thus Swastik in the Vedic parable is also Aditya, akin to Whitsuntide of the Semitic tradition. The tradition of the Great Bear (Saptarshi Mandala) revolving around the Pole Star (Dhruva Padam) is both a Vedic and a Freemasonry ideogram. It represents death and resurrection, the basis of the Crucifix having deep nature, pagan and shamanistic origins across Asia. Within the two the most ancient roots that are ancient, natural, shamanistic and pagan, the universal principle of sustainability may therefore be recovered. Fortunately, the Vedic roots are the same!

Why and how, across many periods, did so many diverse cultures sustain the usage of the same ideogram and ostensibly with the similar meaning? Swastika is one of the oldest symbol recognized to the human race and has been in continuous application in one form or the other across the globe. The highly auspicious symbol is derived from the Vedic Dharma, the oldest way of life (Eridos, 2009). The reason for the sustenance of Swastika over the centuries is not only cultural but also has scientific dimensions and consistency with the universal concept of humanity and spirituality. Moreover, geometrically Swastika represents unchanging, endless, and multi-directional nature of God as turning it around its centre does not make any physical or geometrical change and portrays eternity (Padhya, 2005).

Its arms denote the unintended way to reach the Divinity through intuition and not by intellect and reflect that the path is often not straight, but takes unanticipated turns. The inevitable sustainability of the symbol is also attributed to its coherence with the set of five core Sustainability Principles – the spiritual domain (attitudinal orientation and basis for universal code of ethics), social domain (cultural and social connections), domain of life (bio-spherical conduct), economic domain (fortune and auspiciousness), and material domain (regulating the flow of energy) (BenEli, 2005). Swastika is truly a ‘living’ ideogram and much more than a symbol.

Semantics behind the Ideogram

The Penguin Dictionary of Symbols (1982) says:

One of the oldest symbols in existence is the Swastika, and it is one of the most widely spread, from furthest east to Central America, via Mongolia, India, and Northern Europe. It was well-known to Celts and Etruscans and to Ancient Greece, so that the so-called Greek key pattern derives from it. Some writers have tried to take it back to Atlantis, which shows its great antiquity. 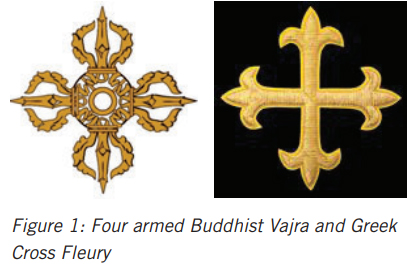 The power of the Sun is Savita (Savitri) in the Vedic Cosmogony. Its all-embracing cardinal manifestation is evident in the syllable 'Savita Sarbatati', which means the divine rays of the Sun (Savita) which is both a Creatrix (Left hand or the ramification of Tantra) and a Reconciler (Right hand or path of Yoga). 'Savita Sarbatati' is all embracing cardinal, a pervasive space realized by the Seer (Rishi) and

In the Rig Veda 4.53.3-4, Swastika is evident in the quadrantile anthropic form, where the power of the Sun becomes the power of the seer, with arms extending eastbound, westbound, northbound and southbound, embracing the four cardinals and all space. It is analogous to the universal body of the Christ, another sacred document composed a few thousand years later. A near description is evident in the Rig Veda 2.28.2 and 6.71.1. The quadrantile space has been made evident in the ancient Persian literature emulating the cross-like Garden of the Eden called the Chahar bagh (say, the Taj Mahal – see Figure 2). 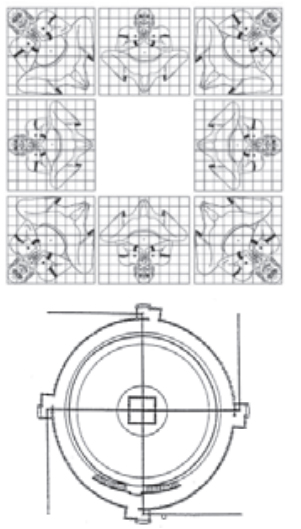 manifested as a Seer-realization (Dharana). The pattern brings forth the highest dynamism between spiritual harmony and physical space, which is Swasti evident in the explanation by R. Guenon in Penguin Dictionary of Symbols. The references are evident in the Rig Veda 3.54.11, 1.94.15; 6.15.18 and 6.56.6; and 9.96.4. A powerful rendition of the idea is also evident in the Dasam Mandala of the Rig Veda: 10.36.14. In here the four cardinal directions i.e., Issan, Vayu or Maruti, Nairit and Agni are all evident. It constitutes the framework of the Vastu Purusha Mandala, the Buddhist Stupa Footprint and the Ashokan Pillar (see Figure 3). Circulation around a wheel, formation of the apsidal (a crescent network) of either a Buddhist Chaitya Hall or a Christian basilica representing peace and cosmic harmony. What is the underlying tie? It is Swastika.

Seer Lush (Rig Veda 10.35.all) describes the cyclic movement of the all benign Agni which he terms Swastagni. The whole sutra portrays the movement of the Sun (Aditya) holding the wheel of Cosmic causation and law, which is dhamma portraying what is right and what is auspicious for all humanity. Sage Vasistha, a representative guardian sage from the array of the celestial seven sages, presents the recurrence of cosmic sustainability (Rig Veda: 7.97-101). That is the Aryan way and that has shaped the course of cultures around the world (see Figure 4). 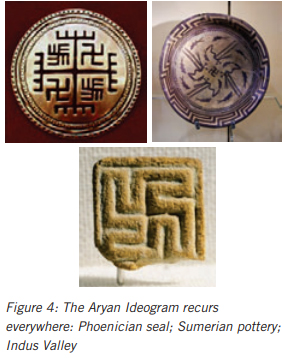 The present book has arrived at a single symbol that alone can trace the very antiquity of Indian history, its Vedas and the age of the Aryan Sages mentioned in the oldest of all texts. It has been able to trace a common pattern to link and network the ribbon of world Today a large pool of faculty, scholars and summer interns of 2016 has converged to answer these aforesaid dimensions exploring a recovery of one Symbol – 'The Swastika'. A team of 50 interns from various IITs, NITs, CEPT (Ahmedabad), SPA (Bhopal and Delhi), Jadavpur University, Kolkata and many others have joined the Science and Heritage Initiative (SandHI), IIT Kharagpur to research and display the answers through an Exhibition in the Indian Council for Cultural Relations, Kolkata on July 8 – 10, 2016. The present book is a sustained testimony to the effort.

When Gautama the Buddha had come to Varanasi, by re-establishing the 'the Wheel of Cosmic Causation', he brought forward the lost Swastika, one of the most ancient symbols of the world. The architectonic footprint of the Sanchi Stupa is the testimony (see Figure 3). From the iconography of ancient Varanasi, to the spiral formations and cyclic patterns of the modern City of Auroville offered by the first generation followers of Sri Aurobindo and Mira Alfassa, IIT Scholars today are tracing the codes and patterns of DNA and even Chromosomes, underlying all – life, evolution, and sustainability (see Figure 5) 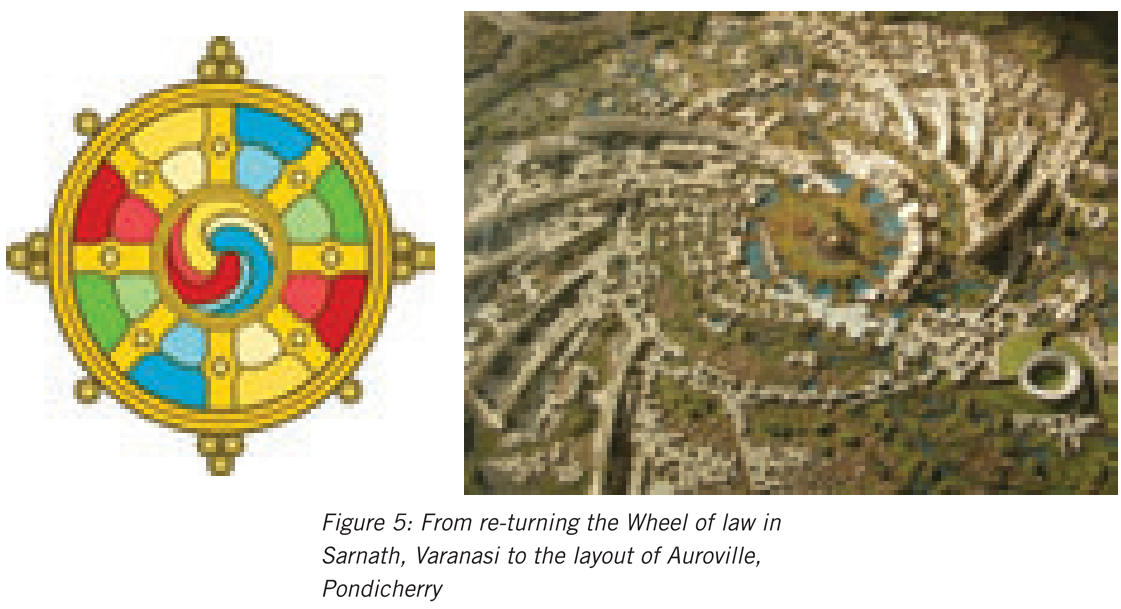 Swastika or at times, Svastika, can be seen everywhere. Nicolas Léonard Sadi Carnot, a French Scientist in 1890s traced the ancient order and disorder (entropy) in his second Law of Thermodynamics. Known as the Carnot's civilizations, much of which the world owes to India. It also forwards a scientific basis that cross-cuts the latest of scientific concepts like Sustainability and Life Cycle renewals in contemporary evolutionary, environmental and the ecological sciences.

Cycle today, inspiring all contemporary generations of scientists and engineers around the world working on everything from Heat Engines to Flywheels as Large renewable Energy systems, the four stage pattern of the Swastika is evident in the four stage energy system. Every branch of Swastika is a force and it is equal and opposite of the other one exactly opposite to it. In the language of science it is called a Torque, which is also an ancient Indo-European and Celtic pattern of embroidery and Jewelry (see Figure 6)

In natural sciences, the patterns recur through the iteration of potential and kinetic energies or Conductance-Inductance in a 4 stage Mechanical Mass-Spring system or a L-C circuit in Electro-Magnetism (see Figure 7). The ancient Vedic wisdom has continuously resurfaced through the pages of modern science and currently in the books of applied science and mathematics. 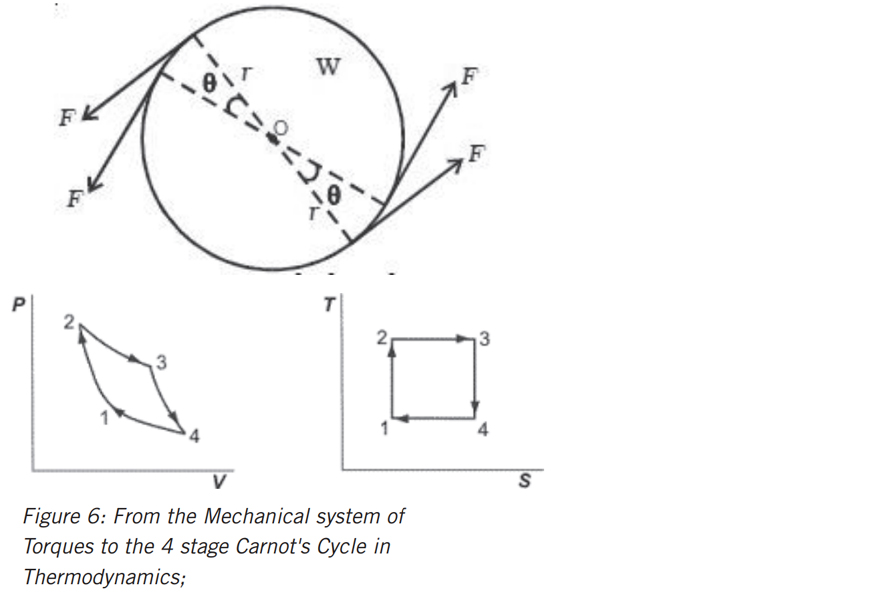 The present book has showcased the global advent of Swastika, from the seals and images of the Mayans to that of the Aztecs in ancient America; from the Indus Valley Swastika seals portraying the oldest Vedic.