Concept of Complete Religion is based on

All in ONE and that ONE in All

Everything in the universe is that One, appearing in various forms. When a little part of it comes, as it were, into this network of time, space, and causation, it takes forms; take off the network, and it is all one. Therefore in the Advaita philosophy, the whole universe is all one in the Self which is called Brahman. That Self when it appears behind the universe is called God. The same Self when it appears behind this little universe, the body, is the soul. This very soul, therefore, is the Self in man. There is only one Purusha, the Brahman of the Vedanta; God and man, analysed, are one in It.

Whatever exists is you. You are the Infinite. The Infinite cannot be divided. It can have no parts, for each part would be infinite, and then the part would be identical with the whole, which is absurd. Therefore the idea that you are Mr. So-and-so can never be true; it is a day-dream. Know this and be free. This is the Advaita conclusion. “I am neither the body, nor the organs, nor am I the mind; I am Existence, Knowledge, and Bliss absolute; I am He.” This is true knowledge; all reason and intellect, and everything else is ignorance. Where is knowledge for me, for I am knowledge itself! Where is life for me, for I am life itself! I am sure I live, for I am life, the One Being, and nothing exists except through me, and in me, and as me. I am manifested through the elements, but I am the free One. Who seeks freedom? Nobody. If you think that you are bound, you remain bound; you make your own bondage. If you know that you are free, you are free this moment. This is knowledge, knowledge of freedom. Freedom is the goal of all nature.”

The Macrocosm & the Microcosm 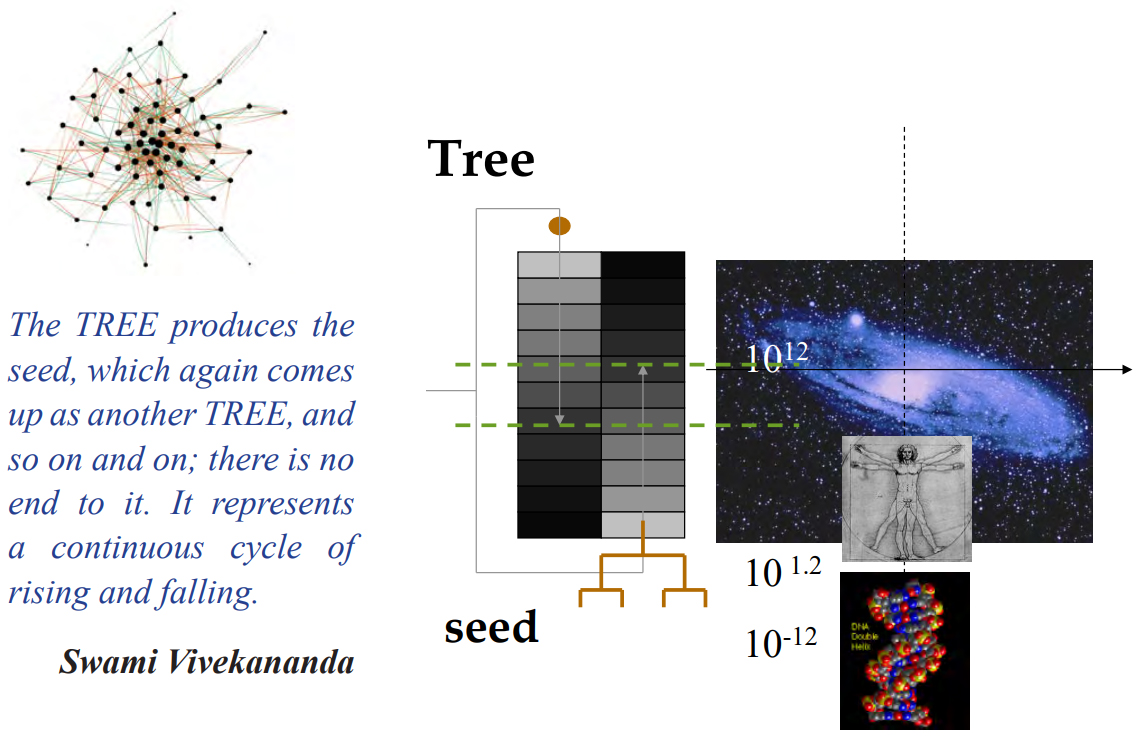 THE KEY FEATURES OF MADHUVIDYA

The pairs of complementary opposites in the supreme and all-embracing soul, is the soul beyond universe and the soul of the universe. Finally and third, it is also the soul of the aspirant, the Purna or Complete Yogi:

Yoga is the union of the individual self (jivātma) with the supreme self (paramātma)
—Yoga Yajnavalkya 1.43

The individual self in all bodies is THAT SELF IN ALL (Phenomenal Yoga 1 here, on this side of infinity) and the supreme self is THAT SELF that contains it ALL (Transcendental Yoga 2 there, on the other side of infinity). The Union (Samyoga) between the two interplays of Yoga is PURNA YOGA, as established by the league of Great supreme sages (Brahma Rishi Samgha), of which the Seven Sages, Yogi Yajnabalka, Mahayogeswara Dattatreya, Gorakshanathji, Sri Ramaksrihna and Sri Aurobindo are just to name a few. 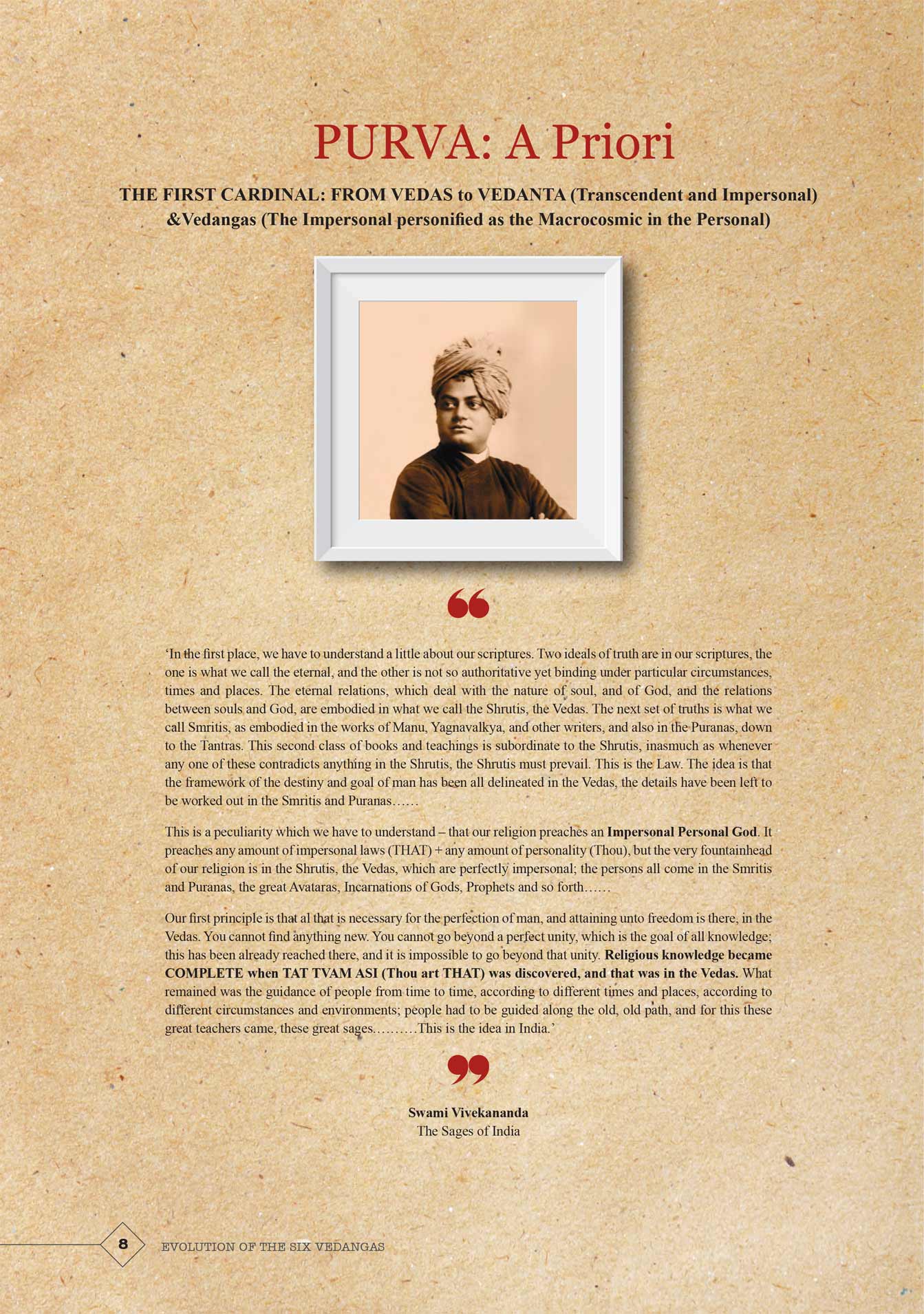 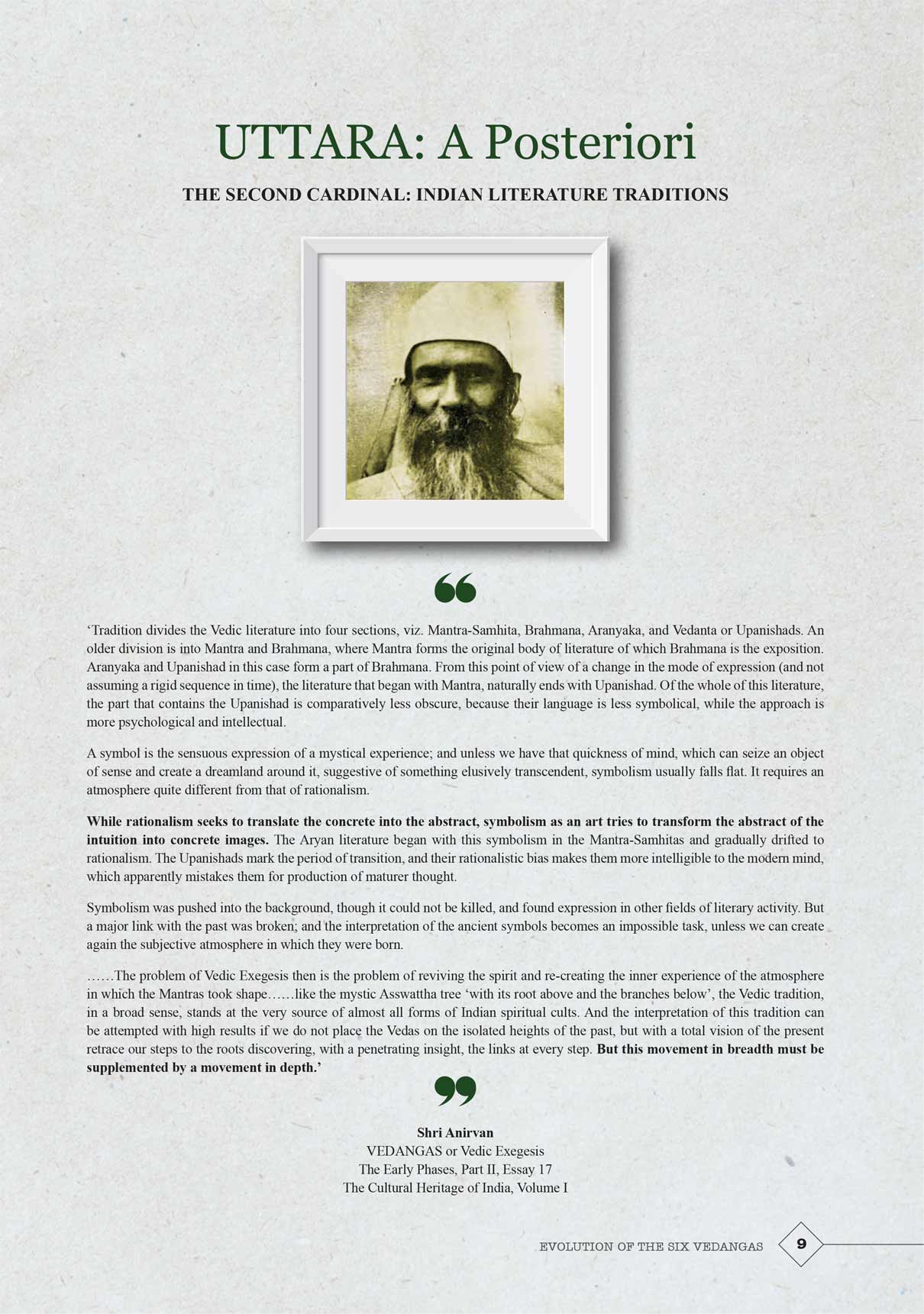 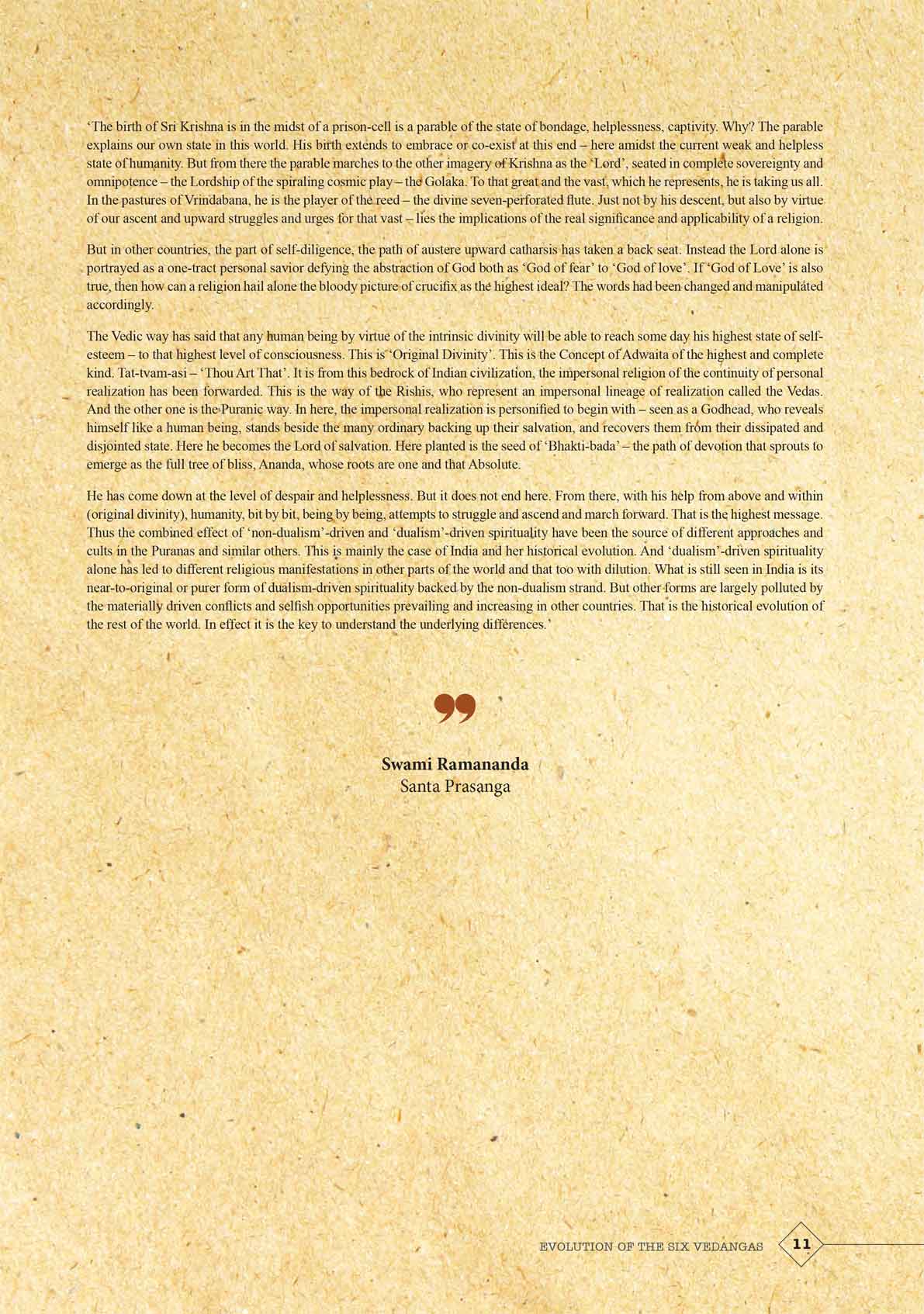 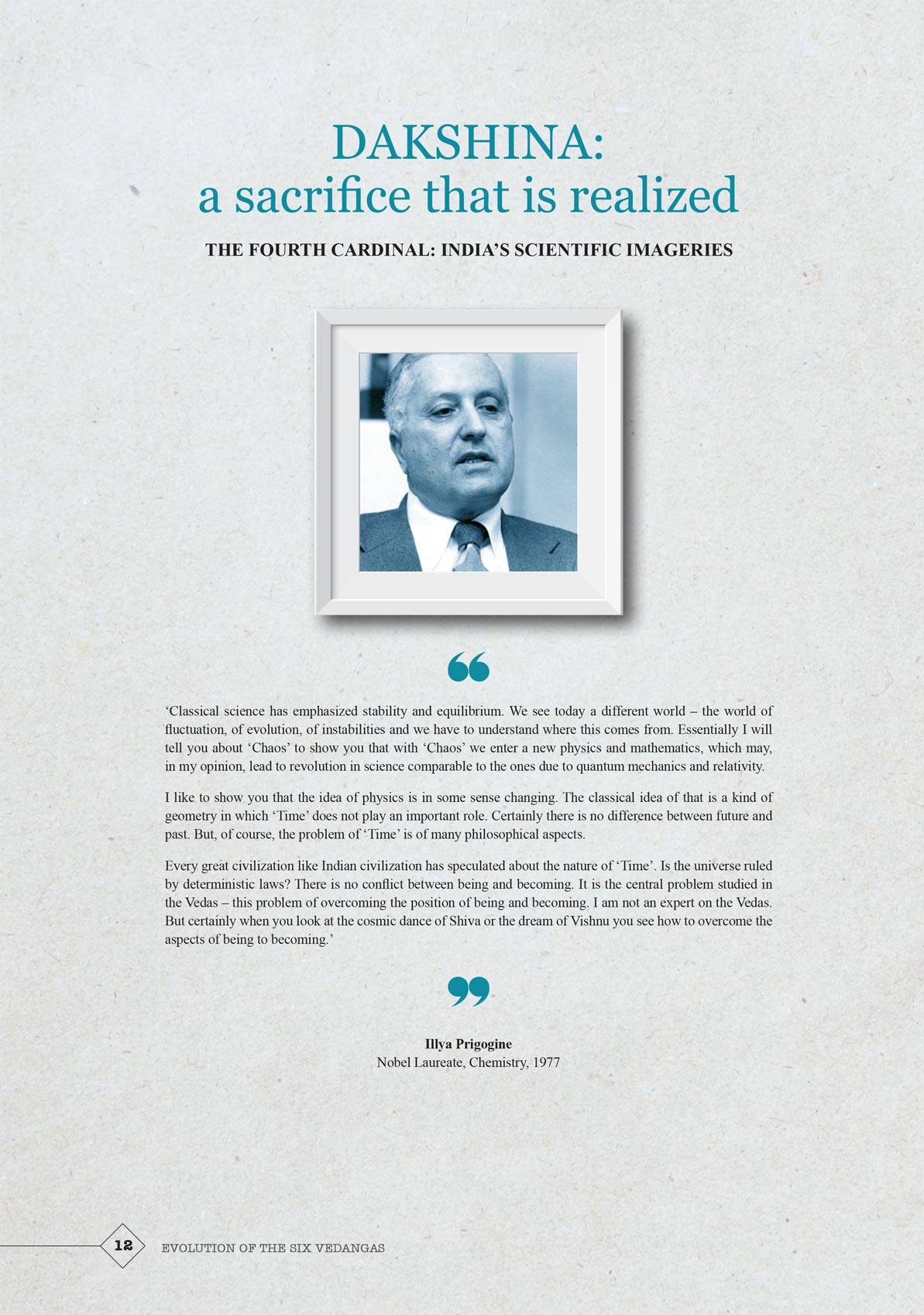 The chain of interdependence from one network to other networks, or between the flows of information transfer within a network, is common in both evolution in nature and the neural technology that is evident. Adjustments, adaptation or blockchains from one element of design to another element in the flow can have knock-on effects on the performance or relationships of other elements.

The design of a piece of content in micro-evolution is both a standalone object and a function of a positional or an interconnected sequence. This is the foundation of numbers, as conceived by the Vedic Seers in the systems of macro-evolution, i.e, the cosmos. Thus, when content changes, the connections to other content will, to varying degrees, change too.

Thus development of language as a part of evolution (Siksha), the culmination of language as rhythms and meters (Chhanda), the realization of the causation (Karana) language systems as a deeper system of consonants, vowels, syntaxes and semantics (Vya-karana), the collapse of all that to a larger embedded pool of conscious flow of interdependence and etymons (Nirukta) leading to a Universal in a nutshell or seed Logos integrating time (Kalpa) and diverse manifestation (Jyotisha) is the whole foundation of Vedangas.

One may think of a pedagogy or a curricula in which all subjects were connected dynamically? Wings of stratification or networks garner aspirers to explore the surprising connectedness and multiple degrees of separation between apparent diversity of topics like Physics and music; or geography and political science.

Much of rhythms and proportions of Modes are both physicalmusical and a lot of our existential understanding is geo-political.

Thus cross-linking a variety of availalable knowledge systems from plant biology to music, or algebra to sociology, reinforces the holistic nature of existence on the one hand, and the response of a diverse array of humanity in it, where someone will love to play a guitar more than doing another soul hankering for ecological studies.

The variety in the temporal (kalpa) and the light-cycle of subtleto-visible manifestation (Jyotisha) are therefore both a biotechnical and esoteric-philosophical system of understanding that is only accessible by Yoga.

Thus Vedangas offer a cross-cutting array (Bhyuya) of rays emanating from the inner sun in the Vast (organized by the Mother in her womb, the matrix or Matariswan in the Vedas) of opportunities. It is equivalent to the ‘Brahma-Yoni’, the genesis point, containing inside the Womb, the Matrix of all creation, as embraced in Gayatri, a lead Chhanda.

The Cosmic schema of things is an extremely rich internet of things, undoubtedly the deepest network which has had the biggest impact on human evolution as a whole and also individually.

Thus, three sons born in a similar geographical sace (ecology and Environment), in a same family of parents (genetics) still display varied evolution and multiple choice (Jyotisha) based on a decentralised network. The natal data (Purva-pragna of the Vrihad.Aranyak Upanishad) that configures transmigration of soul (Sutra.atman or fluxes in Isha Upanishd or Buddhist cosmogony) over time are distributed across the network without a specific reliance on any particular local hub or immediate central hierarchy, but to a large wheel of things in seed (Nirukta) and time (Kalpa).

A variety, heterogeneity and a process of continuous freedom in decentralization in the Vast (Chi) are juxtaposed with strict control and a common principle of causation (Li) in the Universe. They co-exist.

The flow of seasons and their annual repetition, the cycles of death and re-birth in flora and fauna, show that nothing in nature is as linear as it seems.

The system of learning is therefore non-linear and the flow of Vedangas from an open-ended system of analyses (Siksha) to the variety of evolution in cosmic light arrays (Jyotisha) and timecycles (Kalpa) is a perfect illustration of a nonlinear system.

The human wisdom in the creative ladder of consciousness connects the dots spatially, conceptually and temporally, rather than just following a straight line of progress. A system of inquiry cannot measure the educational value of a book or lesson to an individual purely based on the volume of information it contains.

Thus multiplicity and unity are not opposites but complementary and dialogical.

Networks therefore are time-cyclic (Kalpa) having a flowing (dynamic) collections of data (statics) that can exponentially yet comfortably increase in quantity and complexity. The role of multiplicity is to enhance the ONE exuding to the many in this universe (which is descent) and also involution, as that principle of That one from the other side of infinity is also involved here, as Chaitya Purusha of Kapilo-updesha (Bhagabata-Puranam).

The vibrant consciousness involved on this side of infinity is pushing the many to retrace that one unity, which is ascent and Evolution. The system of Vedangas is a necessary structure to augment the process of change.

Thus apparent complexity of inter-penetration is an everexpanding network of knowledge always accommodating the expanding purpose of evolution (Enthalpy or Tapasya), affording learners a greater range of discovery and energy in living exploration and reducing confusion and frustration in existence (entropy). The world of networks is therefore a Wigs of truth, which is round like a Carnot’s Cycle or a Life cycle, and not flat without any skews and kurtosis.

The system of Vedangas is the most ancient and powerful signature of the significance of multiplicity.