Excerpts from - Sages of India

Our first principle is that all that is necessary for the perfection of man and for attaining unto freedom is there in the Vedas. You cannot find anything new. You cannot go beyond a perfect unity, which is the goal of all knowledge; this has been already reached there, and it is impossible to go beyond the unity. Religious knowledge became complete when Tat Twam Asi (Thou art That) was discovered, and that was in the Vedas. What remained was the guidance of people from time to time according to different times and places, according to different circumstances and environments; people had to be guided along the old, old path, and for this these great teachers came, these great sages.

Agni, who has encompassed everything - all gods, is like the felly encompassing the spokes of a wheel.

A Complete conceptual framework is forwarded in the form of a TREE. Trees are complete archetypes of life cycles. The sequence in the cycle begins with the seed and its germination; the cause (the previous seed) and effect (the future seed) of the growth of the tree. By virtue of the cycles of its life, its turns, the crests and the troughs and the matching points between the tow, the Trees in the Forest (Aranyaka) forward the same plan, which is also the pattern of the universe – the external reality and the inner universe – the reality within us. The concept of induction of older cycles (involution) into the making of new cycles (evolution) is forwarded in 10 steps, with returns to scale in the form of renewal, sustainable life cycles and passage to higher evolutionary possibilities. 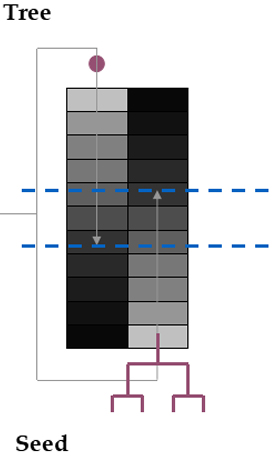