Kolkata Town Hall in Roman Doric style, was built in 1813 by the architect and engineer Maj.-Gen. John Garstin (1756–1820) with a fund of 700,000 Rupees raised from a lottery to provide the Europeans with a place for social gatherings. In 1867 Town Hall came under the management of the municipal authority, the Justices of Peace for the improvement of the town of Kolkata (later on the Calcutta Corporation. Coming forward, in 1999, Corporation purchased the entire collection of rare books and journals on Kolkata from the noted Kolkata expert P. T. Nair to form a reference library. In 2004, the library was formally opened by the then Minister of Library Services. In 2007, the entire reference library of the Corporation has been amalgamated with the Town Hall Library. Now the library possesses about 12,000 books and journals and is visited by many scholars from different corners of India and abroad. Some rare valuable books held by the library. 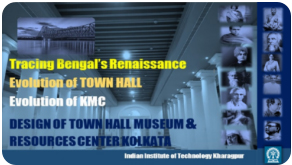 The Kolkata Museum Society had once taken the help of animatronics where visitors witness poet and Nobel Lauret Rabindranath Tagore reciting 'Bharat Tirtha' and singing 'Tobu Mone Rekho'. Dramatic events of the Golden Time (1856–61) or the trauma of the 1940s are also projected. Visitors can listen to old popular music of the bygone days through audio isolators avoiding interference with others or choose to view selected clippings of the films of people like Pramathesh Barua, Debaki Bose, Madhu Bose, Satyajit Ray, Mrinal Sen, Ritwik Ghatak and others. But today it needs to be updated and advanced. And IIT Kharagpur has been given the design responsibility. IIT Kharagpur is going to utilize and advance the glory by focusing on the full tracing of Bengal’s Renaissance and recreate a state-of-the-art analog and Digital museum experience for all incoming visitors, and mainly the younger generation.